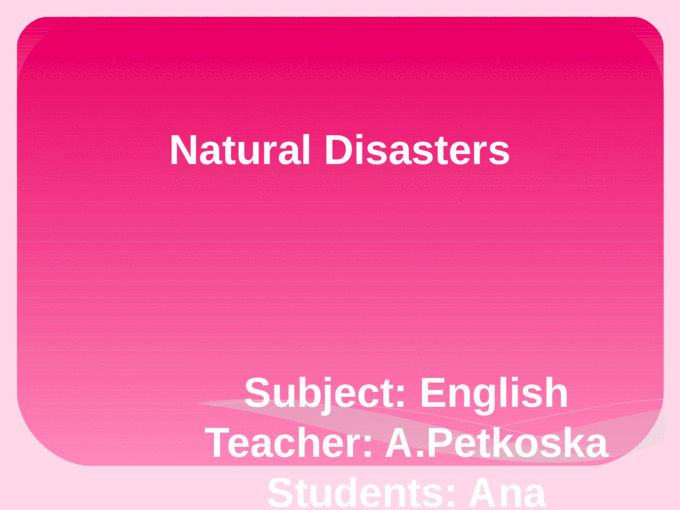 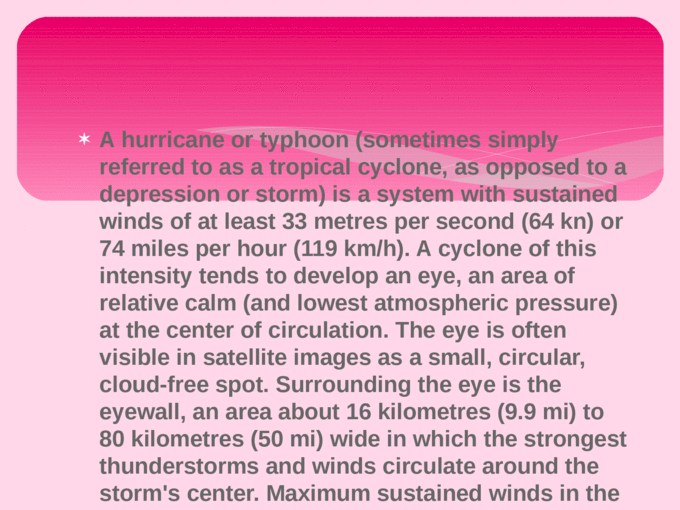 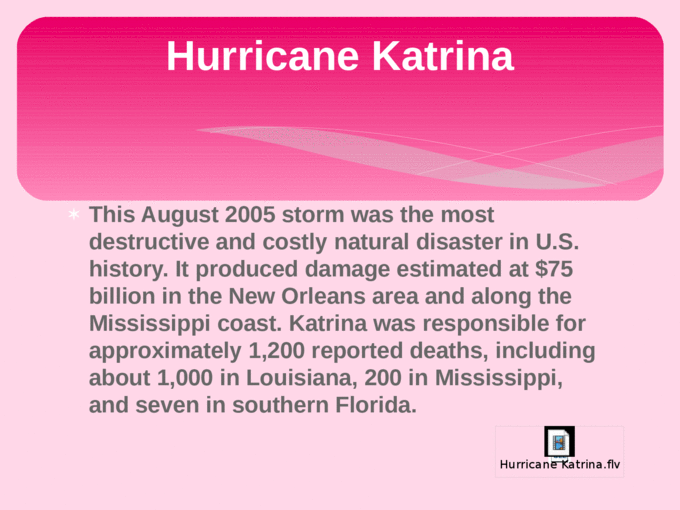 Natural DisastersSubject: EnglishTeacher: A.PetkoskaStudents: Ana Todoroska, Ivona Ilijevska, Simona PetroskaA hurricane or typhoon (sometimes simply referred to as a tropical cyclone, as opposed to a depression or storm) is a system with sustained winds of at least 33 metres per second (64 kn) or 74 miles per hour (119 km/h). A cyclone of this intensity tends to develop an eye, an area of relative calm (and lowest atmospheric pressure) at the center of circulation. The eye is often visible in satellite images as a small, circular, cloud-free spot. Surrounding the eye is the eyewall, an area about 16 kilometres (9.9 mi) to 80 kilometres (50 mi) wide in which the strongest thunderstorms and winds circulate around the storm's center. Maximum sustained winds in the strongest tropical cyclones have been estimated at about 85 metres per second (165 kn) or 195 miles per hour (314 km/h).This August 2005 storm was the most destructive and costly natural disaster in U.S. history. It produced damage estimated at $75 billion in the New Orleans area and along the Mississippi coast. Katrina was responsible for approximately 1,200 reported deaths, including about 1,000 in Louisiana, 200 in Mississippi, and seven in southern Florida. Hurricane Katrina

This hurricane hit on August 24, 1992 in southern Florida. It then turned and hit Louisiana. More than a million people had to leave the area due to the storm. Heavy rains and tornadoes were part of the hurricanes destructive power. Until Katrina, Andrew was the most expensive hurricane in the history of the U.S.

This hurricane, which struck in September 1999, brought so much rain that 13 states were issued federal disaster declarations -- more declarations for a single event than ever before. More than $500 million of federal money was spent on helping states recover. North Carolina was hit the hardest of any state.